HOLDING UP OUR TROUSERS WITH BOTH HANDS

And Abraham expired and died at a good old age, mature and content and was gathered to his people.
​His sons Isaac and Ishmael buried him in the cave of Machpelah…
(Genesis 25:8-9).
Torah is our most sacred text, the Jewish peoples’ document of faith, our Constitution. Without it, we likely would have ceased to exist thousands of years ago. It is what has kept us together as a people despite the most amazing odds, centuries upon centuries of exile, massacres and genocides. But our history is much richer than a recitation of all the tragedies that have befallen us.

We are certainly not alone in this world. Indeed, we are charged by the prophet Isaiah (49:6), to be a light unto the nations, to spread God’s words in Torah throughout the world. In its beginning pages God contemplates a world filled with a multitude of nations, a multitude of different peoples, but all ultimately tied together by a common understanding of what it means to be humans created in God’s image. This is enriching and a call to each of us no matter the realpolitik and challenges on the ground to learn to live in peaceful, mutually benevolent toleration of each other and more, to learn from one another, to be enriched by each other. After all, not just any nation can offer us the brilliant artistry of the Italian Renaissance or the depth of meaning of Greek philosophy offered by the likes of Socrates and Aristotle. Torah acknowledges the origins and existence of other peoples, other nations; it is built into the world as envisioned by Torah.

Abraham had 2 sons, Isaac, the son also of Sarah, who continued the transmission of God’s ultimate covenant with the Jewish people, and Ishmael, the son of Hagar, who became the seed of the Islamic people. These are two nations who share a common ancestry and no matter their disagreements and differences, both sons were able to unite in common purpose to bury their father.

Jewish history is replete with examples of Jewish populations living peacefully in Arab nations. Indeed, during the Medieval period one could correctly conclude that Jewish civilization went through a Golden Age of philosophy, literature and poetry amidst Arab societies and that Arab societies were far friendlier to Jews than were Christian ones. Given that most of us have lived only during a time when the predominant view of Arabs and Muslims, not all certainly but in a general sense, as enemies of Israel and therefore of Jews, it is difficult to imagine anything else. However, such a limited and ignorant understanding would be a betrayal of history, all of which brings us to our present day.

Aren’t we all tired of one war after another, one ceasefire after another in the ongoing conflict between Israelis and Palestinians? And if this exhausts us can we imagine what it must be like to live there when a conflagration erupts? It is a conundrum that seems to have no end in sight. If the most recent ceasefire in what feels like an endless series of them over the years does not yield peace talks, can anyone doubt that there will be more violent eruptions? 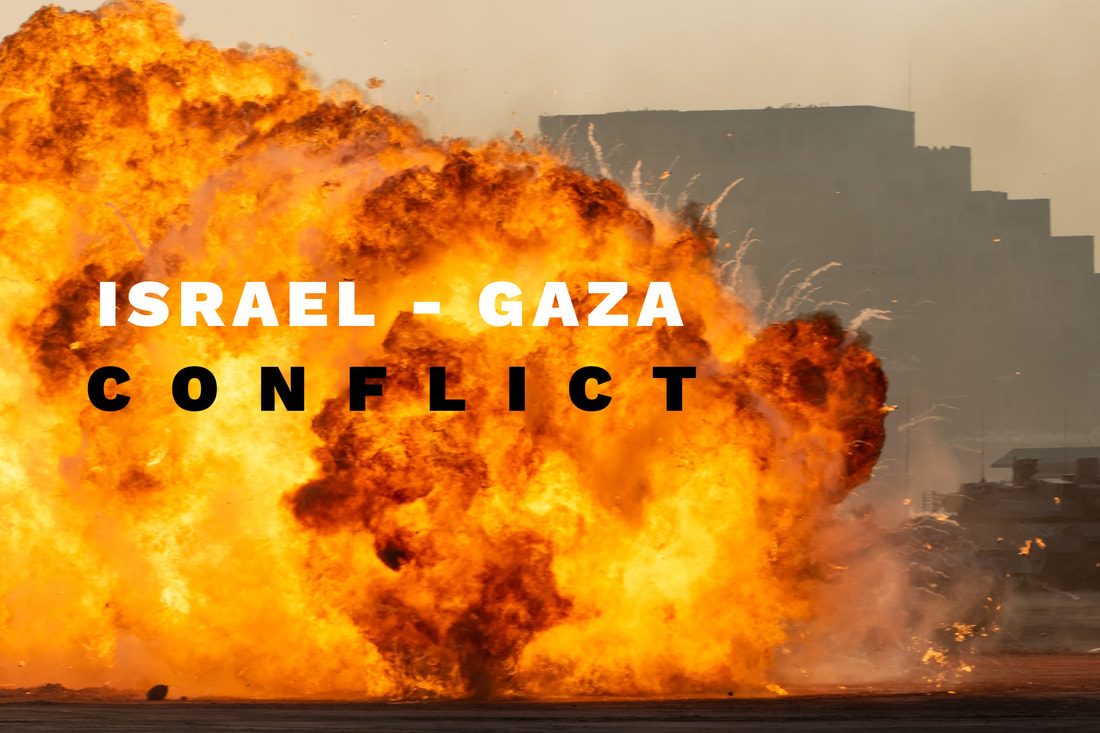 It is so obvious and just so frustrating to repeat of necessity time and time again: Hamas is a terrorist organization that holds its population hostage. When it fires rockets and missiles indiscriminately on civilians in Israel, Israel has a right to defend itself. A right to self-determination on one side does not surrender the right to self-defense on the opposing one. Never. But the right to self-defense does not mean that there is not a humanitarian, tragic cost of human life on both sides.

The generation of Joe Biden and Donald Trump will not last forever.  When members of that generation no longer occupy positions of power and influence we will find ourselves in a very different world whose sensibility will no longer automatically maintain the moral imperative that there can be no light between the United States and Israel, in recognition that Israel is America’s staunchest and only democratic ally in the Middle East. Indeed, these days seem to be increasingly upon us and we should take serious note as support for Israel has now in unprecedented ways become more of a partisan issue between Democrats and Republicans.

Though we do not live in Israel, have not made Aliyah there and cannot vote, as Jews and as Americans we have a stake, a very real one, in this perpetual conflict. Apathy is our enemy, and debate and disagreement mean we care. Have you noticed what some observers are saying about the recent conflict-- that both Prime Minister Netanyahu and Hamas exploited their own populations through this most recent round of violence?  P.M. Netanyahu is politically vulnerable now, has recently been unable to form a governing coalition and saw another coalition forming which would have left him out of power for the first time since 2009, and so as Rahm Emanuel noted “he instigated.” And Hamas responded as one would expect it to respond.

And we who care so much about Israel are left to ask in the wake of this latest ceasefire: has anything really changed? If the ceasefire leads to opportunities for a peaceful resolution then clearly there has been a seismic shift, but if the ceasefire is its own endpoint then we should not be surprised by future waves of violence. As Yitzchak Rabin observed in his quest for peace, We must fight terrorism as if there’s no peace process and work to achieve peace as if there’s no terror.

Prevailing over terrorism, engaging in essential self-defense with episodic efforts to demilitarize Gaza, indeed even searching again and again to negotiate with a real partner also looking for real peace can also not be its own endpoint. This incessant war, sometimes hot and sometimes cold, calls for a deeper humanitarian response even when all essential humanitarian responses have been made. We must ask: How to find an opening when there doesn’t seem to be one? This conflict seems impossible and intractable and perhaps more blood will be shed before there will be authentic partners searching for peace on both sides. Nevertheless, our Judaic ethos tells us we must keep trying even when the rest of the world in similar situations would not, lest we be brought down along with the terrorists by losing our humanity.

There is the story of George Orwell who fought during the Spanish Civil War. He described his reluctance to shoot at an enemy soldier. He wrote: At this moment a man presumably carrying a message to an officer, jumped out of the trench and ran along the top of the parapet in full view. He was half-dressed and was holding up his trousers with both hands as he ran. I refrained from shooting him….I did not shoot partly because of that detail about the trousers. I had come here to shoot at Fascists, but a man who is holding up his trousers isn’t a Fascist; he is visibly a fellow creature, similar to yourself, and you don’t feel like shooting at him.

When we are no longer able to see our shared humanity, we become less human. We understand dehumanization because we have been dehumanized before and we know where it can lead. When Hamas rockets are shot indiscriminately at Israeli civilians, that is the very essence of dehumanization. When Palestinian youth attack a Jewish driver and passengers in Jerusalem, that is an act of dehumanization. And when a Jewish mob in Bat Yam forces a man they think is an Arab out of his car and start beating him, that is also an act of dehumanization. This round of horrific violence was different, as civil unrest poured into the streets of Israel’s cities, especially its mixed cities, with Jewish mobs chanting “Death to Arabs” and attacking Arab passersby and burning Arab-owned stores, just as Israeli Arab mobs also went on the attack against Israeli Jews burning police stations, synagogues, stores and cars.

This was the worst violence within Israeli cities in decades even raising fears of civil war. Neighbors rose up against neighbors. These people know each other but they can no longer see each other’s humanity. Each sees the other as a mortal threat. Each is unable to see past their own superior moral narratives. Where is there an opening when one can’t be found? How to affirm what the Talmud reminds us, that to save a life, any life, is as if an entire universe has been saved? Failing to see one another’s humanity, failing to allow for other perspectives and narratives, not just the superiority of our own, renders this conflict never-ending.

The civil unrest was not only isolated to Israel. Anti-Semitic incidents have increased in Europe as well as in the United States linked to the conflict between Israel and Hamas not only in New York and L.A. but here in Skokie. Mosques have also reported damage. The ADL’s annual survey of anti-Semitic incidents shows a steady rise over the last few years with a surge, the ADL reports, since May 10 of at least 26 instances of Anti-Semitism including physical as well as verbal attacks.

It would be so easy to lament and view these cycles of violence as endless but it would be a mistake to give up hope. If you are upset by what is happening, there are actions we can take including the following:

•    We can try to educate ourselves about the opposing perspective. If we can no longer look into the eyes of our enemies and see ourselves, we have lost a vision of our shared humanity. We must try to understand a narrative different than our own.

•    If you are concerned about a decrease in Congressional support for Israel, please reach out to AIPAC and its mission of strengthening the US-Israel strategic relationship. Contrary to what some may think, AIPAC is bipartisan in its outreach to governmental and community leaders.

•    Magen David Adom, Israel’s Red Cross, is always on the front lines saving lives during emergencies including innocent Israelis and innocent Gazans. Among its ranks rushing in to save lives are Jews, Arabs and Druze.  Amichai has long supported MDA. Doctors Without Borders and Save the Children also provide aid and assist in healing. All of these organizations would benefit by our support.

•    College students need to be educated about the Middle East, about Israel and about the Palestinian plight. We support Jewish students on campus by supporting Hillels.

•    The American Jewish Committee and the Anti-Defamation League both monitor anti-Semitism and work with local and national law enforcement to respond. Both organizations engage in interfaith and inter-ethnic dialogue. This outreach is essential to cultivating relationships with other communities. It all begins with gaining a greater understanding of one another.

If we see an enemy rushing past us completely vulnerable, holding up his/her trousers with both hands, are we still able to see his/her humanity? Are we able to see the humanity of others even if we believe they are wrong? These are vexing questions because the conflicts between the Israelis and Palestinians are complex with roots and opposing narratives that reach back for decades.  Everyone is right and everyone is wrong in so many ways, and contrary to each of their respective declarations of victory, nobody wins in this ongoing conflict. Innocent Israelis and innocent Palestinians are begging us to see their humanity, to understand their suffering. I am reminded that both Isaac and Ishmael came together to bury their father. Is it possible for us to come together once again?

Let us pray that it can be so.